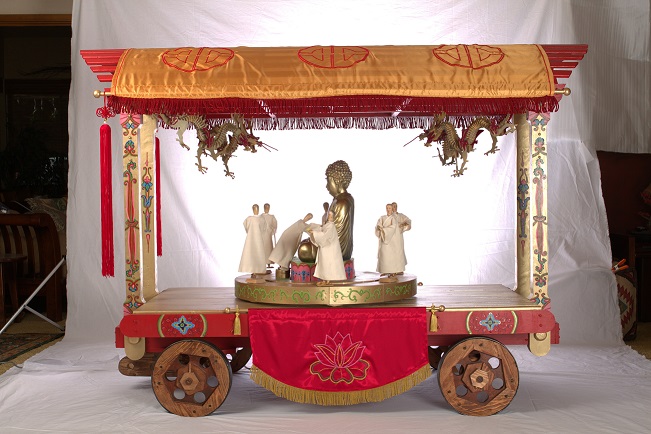 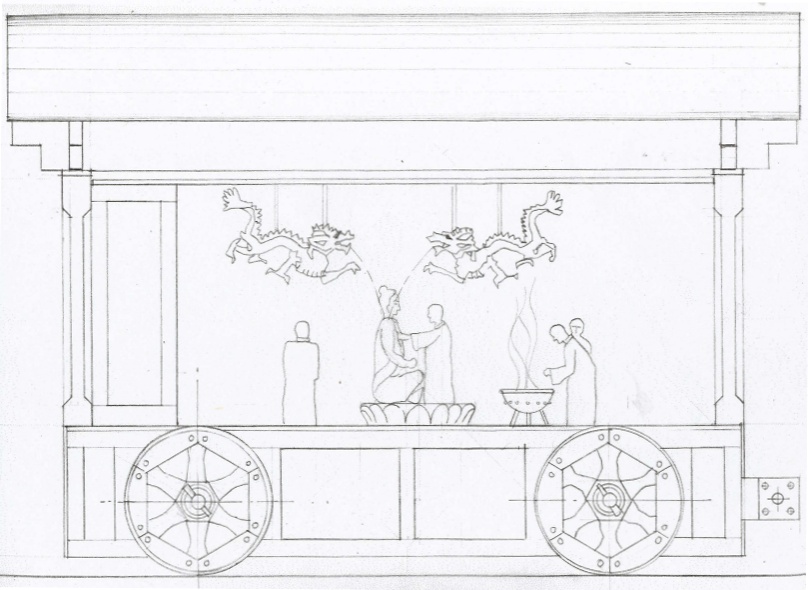 Records from  the Region of Ye

History of Carriages and Pumps

Peter designed these architectural pieces based on a literary account of an altar carriage commissioned to celebrate the Buddha’s birthday found in the Records from the Region of Ye.  This automated carriage was designed between 334 and 349 CE.  Using research from renowned Sinologist, Joseph Needham in Science and Civilization in China, Peter designed the carriage based on technologies available in China at the time.  For example, the rotating monks are set on a 9’ outer diameter disc set flush with the main display platform.  The water supply to the dragons is raised by a chain pump from a lower storage tank up to a cistern tank.  The pump is activated by the movement of the carriage, via the rear axle-drive shaft.  The lower storage tank, required gear systems and the desired visibility of the display for spectators, were factors in setting the height of the main display platform.  These architectural designs serve as the basis for a 3D animation video and a model carriage of a past technological marvel.

Records from the Region of Ye 鄴中記 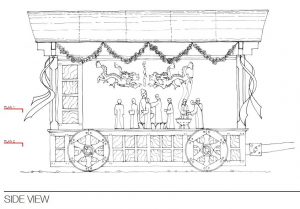 Shihu (r. 334 – 349) commissioned Jiefei (解飛)
Animated float: 10 feet wide, 20 feet long – flat four-wheeled cart 檀車,廣丈餘,長二丈,四輪
Golden Buddha image on top – 9 dragons above 作金佛像,坐於車上
When the cart moved, the 9 dragons would spew water over the image九龍吐水灌之
Center wooden monk rubbed area between Buddha’s heart and abdomen又作木道人,恒以手摩佛心腹之間
10 or so wooden monks circumambulated the Buddha — each is 2 feet tall, wearing a robe – when monk reaches the front of the Buddha, he will bow and offer incense into a censer又十餘木道人,長二尺。餘皆披袈裟繞佛行,當佛前,輒揖禮佛。又以手撮香投爐中,與人無異
When the carriage stopped, activities stopped 車行則木人行,龍吐水,車止則止 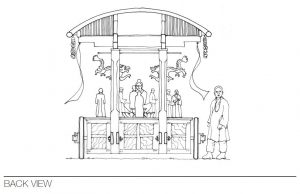 Shihu liked to glorify the Buddha with incalculable extravagances. He commissioned an altar-carriage. In breadth, it was more than a zhang (approximately 10 feet), in length two zhang, with a golden Buddha image on top of a flat four-wheeled cart and nine dragons above that. A wooden figure of a monk was placed before the Buddha, and all round the Buddha were more than ten monks, each a bit more than two feet in height, all wearing white kaṣāyas. When the cart moved, the nine dragons would spew water over the image of the Buddha, and the monk standing in front of the Buddha would rub the area between the Buddha’s heart and his abdomen, as if washing a newborn. The other ten-odd monks would circumambulate the Buddha. As each would come just in front of the Buddha, he would do obeisance, then, taking incense in his hand, deposit it in a censer. When the cart stopped, so would the activity.

This carriage showed dragons spewing water over a Buddha’s image and wooden monks circumambulating and offering incense to the Buddha. This is animated by Frank Yuan using Mr. Peter Martin's design of the Later Zhao carriage.

This video is made possible by the voluntary effort of:

Video length: 3’25’’
This short film documents the motivation behind the architectural drawings and animation of an altar carriage in the Later Zhao kingdom of northern China. Ana interviews Venerable Dr Juewei to find out what makes this automated altar carriage special and how people today relive the past using modern tools and technology.

This video is made possible by the voluntary effort of:

Revised 3/9/2012
The carriage’s dimensions of approximately 20’ x 10’ were taken from historical accounts of the actual procession. So were the number of monks and dragons incorporated into the design. Based on the functional requirements of the robotic complexities described, the overall load, the rough road beds, and the distance travelled, the carriage had to be robust.

Main Chassis
The carriage had to have a strong chassis frame. The heavy timber frame illustrated serves to support its super structure and primary drive shafts as well provide for integral hitching points at the front needed to pull the carriage.
Back to the top
Wheels
The 3’-6” diameter of the wheels was determined based on a number of factors including:
Ease of movement on rough roads.
Ease of movement relative to driving gear systems.
Advantageous position of drive axle relative to other drive systems, the water pump and bottom cistern.
Optimal viewing height for robotic display.

Overall Form
Because of the need to continuously recirculate water that spouts from the dragons, the carriage has a solid back from the base to the roof. The sides and front are left open with the exception of two front columns that help support the roof, dragons and water cistern.
The height of the carriage roof is determined by the water pump system, upper cistern, and optimal visibility of dragons for spectators.
A stretched, curved and waterproofed fabric is a light weight, traditional, functional and aesthetically pleasing solution to sheltering the carriage. The roof also conceals the upper water cistern.
Back to the top
Display Platform
The rotating monks are set on a 9’ outer diameter disc set flush with the main display platform. This dimension and resulting length of circumambulation are determined by the reported width of the carriage. The interior diameter of the disc offers ample space for the Buddha and the monk rubbing the former’s chest. The Buddha and attending monk are set about a foot above the platform level on a lotus flower base rising from a pool of water recharged by the dragon fountain.
Back to the top

Later Zhao Carriage Technology
Revised 3/9/2012
According to renowned Sinologist Joseph Needham in Science and Civilization in China [1954-2008…] the technologies required to create the carriage and mechanical complications depicted were available in China at the time of its fabrication. The following is a brief list of relevant technologies and the dates they were initially utilised:
Ball Bearings – 2nd Century BC
Belt Drive – 5th Century BC
Malleable Cast Iron – 4th Century BC
Gear Wheels – AD 50
Chain Pump – AD 184
The famous mechanical South Pointing Carriage was created in AD 184.

[revised 3/9/2012]
There are 10 monks who circumambulate around the Buddha. This is accomplished by setting the monks on a disc platform over a series of 3 free rollers and one vertical gear wheel. The outer downturned edge of the disc has gear ‘teeth’ that engage the drive gear. The drive gear is connected to the drive shaft at a ratio that will cause the monks to rotate at a rate of about 3 times slower than the main carriage wheel. This will, therefore, provide one complete monk rotation each 30 seconds [a speed of .6 mph].

The speed can be adjusted by changing the size of the drive gear and the depth of the monk disc platform downturn. However, the depth of downturn does impact the monk turning and bowing mechanism.
Back to the top

Monk Turning and Bowing Mechanism
The monk turning and bowing mechanism [MTBM] is activated as the monks approach the position directly in front of the Buddha. At this point, they turn from their concentric, circumambulatory path to face the Buddha, bow, and offering incense. These three actions are accomplished as follows:

Monk Turn
Attached to the bottom of each monk is a tube with a horizontal gear attached. As the monk approaches the bow location, this gear engages with a curved rack gear at one side that is calibrated to cause the monk’s ‘bottom’ gear to rotate 90º. As the monk passes the Buddha, he bows [see below], continues to move and then engages another rack gear on the opposite side that rotates him back 90º.
Back to the top
Monk Bow
Each monk’s ‘body’ is split and hinged at the waist. The lower portion is attached to the tube and gear system noted above. Set into the tube is a solid rod that can move up and down and has a small wheel at its bottom. As the monk moves into position in front of the Buddha, the wheel runs over a shaped surface that causes it and the rod to rise. As the rod rises, it pushes up onto the back of the hinged upper torso, causing the monk to appear to bow. All mechanisms are concealed by the monk’s robe.

Incense Offering
As the monk bows, his arms, with weighted clasped hands and pivoted at the shoulder, will move outwards to achieve equilibrium. This movement will give the appearance of the monk making an offering. Mechanisms within the monk’s hollow arms can be devised to allow for the release of a spherical piece of incense at each bow.
Back to the top

Revised 3/9/2012
There is a monk at the center of the carriage in front of the seated Buddha. The rubbing the Buddha’s chest is an illusion when viewed from a distance. This illusion is created by a shaped disc mounted flush with, and colored to match, the Buddha’s chest. The hand of the monk is attached to the outer edge of the disc. The disc is connected to the carriage drive mechanism and rotates. Seen from a distance, the hand appears to move in a circular motion rubbing the Buddha’s chest. The arm, to which the hand is mounted, has a flexible shoulder joint hidden under the robe, allowing a 360º motion.

Chest Rub Mechanism
The gear mechanism provides the desired speed of chest-rub rotation rate (CRRR). The system is designed to slow the CRRR down to about 2 chest-rub rotations per minute (2CRRRpm) through two sets of beveled gears off the main drive shaft. This CRRRpm can be adjusted by changing the size of the horizontal bevel gear located at the bottom of the main chest rub vertical drive shaft.
Back to the top

Water Circulation for Dragons
Revised 3/9/2012
Water Use
There are nine dragons suspended below a ceiling. Each spouts a .325” (8mm) diameter shaft of water over the Buddha.
Tests show that with a +/- 9” head of pressure, the nine dragons discharge around 6 gallons of water per minute.

The water supply to the dragons is raised by a chain pump up to a cistern tank. The pump is activated by the movement of the carriage, via the rear axle-drive shaft. The wheels of the carriage are 3’-6” in diameter, and therefore, travel about 11’ for each revolution.

In a procession, we assume the speed of travel to be around 1.5ft per second, or 90ft per minute. The wheels of the carriage, therefore, rotate approximately 8 times per minute.

The water pump is connected by gears to the wheels. These gears are at a ratio of 1:2 causing the chain pump, set on 1.75’ diameter wheels, to travel 2 revolutions to each one of the carriage wheels, or a distance of 11 feet. The pump travels about 88ft per minute [8×11’].

Summary:
Water use — 4 gallons per minute
Supply ——–6.5 gallons per minute
In order to prevent overfilling of the cistern above the dragons, there needs to be an overflow pipes to return water to the storage tank at the base of the chain pump.
Back to the top 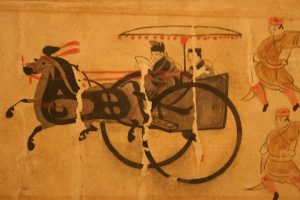 These sometimes included a small tower on top. The spokes of the carriage wheels connected at hubs. Four wheeled carriages appeared in the Eastern Han (25-220 CE). During the Northern and Southern Dynasties large carriages driven by 12 oxen appeared. This is documented in the History of the Later Wei (后魏书). In the Liang Dynasty (502-557 CE) carriages around 100 feet tall appeared.
Back to the top 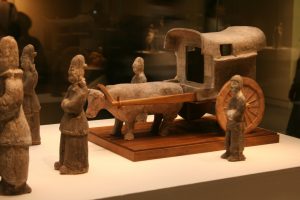 The south pointing cart, shown below, was invented in the Three Kingdoms period. It used a system of gears and a compass to keep a figure on a pole pointing south. 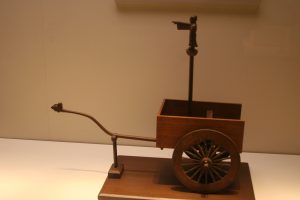 Pumps
The square-pallet chain pump (龙骨水车 “dragon back water wheel”or 反车) was one of the most widely known ancient Chinese irrigation devices. According to the History of the Later Han Dynasty (后汉史) it was invented in the Eastern Han (25-220). This is well before our parade in the Northern Wei. It could be driven by 1 to 2 humans using pedals and, later, animal, wind or water, and was widely used. The pump consists of a trough with wooden boards 13-23 centimeters wide mounted on rails. The rails with wooden boards forming the dragon’s backbone.
Back to the top 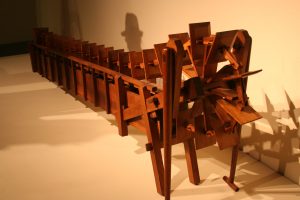 Written By Peter Martin
Back to the top